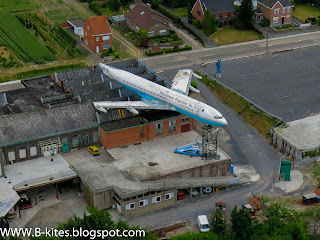 The Boeing 707 from the African republic of Benin is parked on the roof  of the GoWalt complex in Wetteren. A Lockheed P 80 is exhibited at the parking lot . Rumors are telling us that the B707 private plane flew with the leader of the Moon sect (Moonsekte) and the President of the Republic of Benin. In 1993 the unit was held on the ground at the Ostend Airport . The inside is/was in excep-tionally good condition ; There are still original teak cabinets in the cabin and the kitchens are well preserved.   The tail fin was removed in 2010 . The engine nacelles were removed , which are nowhere to be seen. The aircraft is now in poor condition. 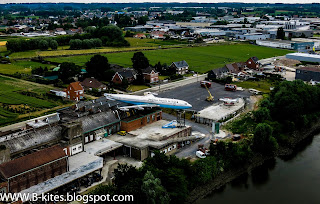 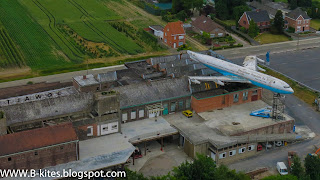 To make these pictures, I used a camera (Canon G15) lifted at 150 meter high by a kite (strandvlieger). The kite is attached/and secured to my body.  In this case the lifting power was produced by Frank Dehu's yellow vented Rokkaku.
The camera rotates and is triggered automatically, but I can take over all functionalities from the ground.   Yes, I do see what the camera is shooting (video downlink) .