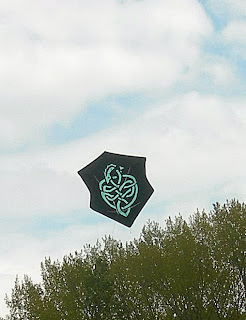 A traditional Japanese fighter kite with a beautiful snake applique

The Rokkaku dako(六角凧) is a traditional six-sided Japanese fighting kite. Traditionally it is made with bamboo spars and washi paper. The rokkaku kite is often hand painted with the face of a famous Samurai. The structure is a vertically-stretched hexagon with a four-point bridle. One spar runs from tip to toe and there are two cross-spars. Flown on a taut string the kite is stable and rises rapidly. When the line is released the kite tumbles until tension is put on the line, at which point it takes off in the direction of the spine. Fighting two or more of these kites involves tipping over or destabilizing the opposing kite or cutting its kite line or bridle.
Stability can be increased by bowing the cross spars, making the kite stable enough to fly without a tail. The rokkaku kite is often used for kite aerial photography and in atmospheric science, thanks to its large surface area and simple construction.