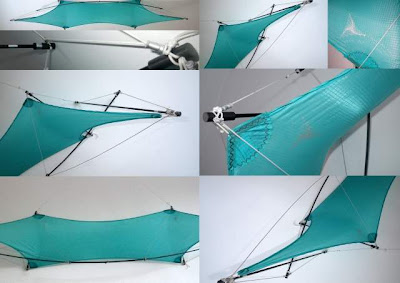 The Synergy deca A-1 kite was designed by Marc Ricketts - GuildWorks and was produced/made by Invento in 97 or 98.
The kites are now only made by Guildworks only sold directly ( you wont find them in the kite
stores or on the Invento website)). Marc Ricketts put the first synergy deca on the market 10 years ago in 94.

Synergetic Skies,
Marc Ricketts
GuildWorks
2322 Atwood Ave.
Madisoon, Wi 53704
608 249 2725
What is a Synergetic Series Kites?
Dynamic and sculptural in design, three-dimensional and feature a state-of-the-art Tensegrity framework combined with a tension-suspended, aerodynamically-shaped sail. Tensegrity, short for tensional integrity, is a system where the spars do not touch each other, but are suspended in a continuous network of integrated tension lines. Tensegrity is one of the lightest yet strongest structural systems known.(According to Marc Ricketts)
On other Synergetic kite (it's not a Guildworks one)