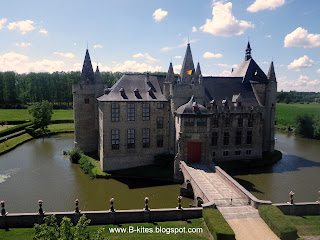 According Wikipedia Laarne Castle (Dutch: Kasteel van Laarne) is a moated castle in Laarne in East Flanders, Belgium. Established in the 11th or 12th century to guard the approaches to Ghent from the sea, it was comprehensively renovated in the 17th century.
Since 1953 the castle has belonged to the Koninklijke Vereniging der Historische Woonsteden en Tuinen van België ("The Royal Association of Historical Houses and Gardens in Belgium"), to whom it was given by the last private owner, the Comte de Ribaucourt. It is a protected national monument and is used as a museum.


For the people of South Africa visiting the site at the same time; drop me a mail