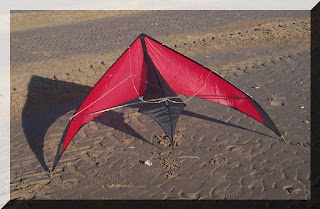 
For the original text look at http://www.kitepower.com/:

The Utopia is something special to look at, a kite that Is strikingly different and aesthetically pleasing at the same time.
DESIGN/CONSTRUCTION
The Utopia is made up from two completely separate pieces: a virtually flat wing which is called the 'main sail', and a keel style 'tail sail', both made from Ventex polyester. The main sail made up of four panels, in one main colour with a contrasting tip flash. A Dacron reinforcement is stuck onto the centre line where the spine spar arrangement is housed. Leading edges are Dacron and the nose is reinforced with webbing. The tail sail is made from two panels joined at the centre line with a flat glued zigzag seam. The edges of both sails are hemmed with thin nylon bias tape, which encloses a leech line on the main sail. It also has Dacron tabs to take the various possible standoff combinations. The sail is well made and cleanly sewn.
The frame of the kite is a combination of wrapped, tapered Dynamic carbon, pultruded carbon and GRP rods. The Dynamic carbon is an 8g, 2 wrap rod used in the lower spreaders and the upper leading edges; the lower leading edge is made from a solid 3mm GRP rod. The spine on the tail sail uses a 5.5mm carbon tube and a 3mm GRP rod in the lower 'trick tail' end. There is also a 3mm rod in the centre line of the main sail. The main sail and tail sail are joined just below the nose, and a slip knot tensioner acts to push curvature into the nose of the main sail. The main sail and tail sail are also joined with a tensioner running from the rear of the T to the bottom of the tail sail centre spar. The wing tips and the lower end of the tail sail have line stitched into the Dacron and this achieves the desired curve with an arrow nock and end cap. A trick line is provided with end caps that fit over the wing tips and spine. Finally the leech line pulls tight to one side only and is held in place under the wing tip end cap.
The rear of the tail sail has a 3mm spreader spar running across it and a tensioning stand-off pushing into the back of the T. The kite has three possible standoffs settings, the standard setting uses the inner position.
The bridle is again, original to designer Martin Schob -the same four point sliding arrangement used on the Tohubowohu.
Initially putting the Utopia together is fairly complicated, requiring a little patience and close observation of the instructions. It comes in a padded
banana shaped bag that allows the kite to be stored without the need to take it apart.
FLIGHT TEST
One of the major features of the Utopia is its vast number of different settings. Five main adjustments can be made: the upper (sliding) bridle line has a slip knot which changes the bridle point position; there are three possible stand-off lengths and differing available positions which affect the outer wing shape; the 'ACL' (angle of attack control line) is a line from the tail sail to the main sail which has a slip knot adjuster; the lower spreader has a spacer which can be used to alter spreader geometry; and finally, the main sail tension line affects the profile in the nose area of the kite. Phew! There are literally hundreds of different possible combinations. To start the Utopia was set to 'standard' with the inner stand-off One tip: remember to put a tape measure in your kite bag to get those line adjustments right.
First impressions are the very light touch required. The Utopia launches fast and is light and nimble on the lines, it will spin so tightly it almost resembles a quad line kite in the sky;
Forward speed was medium and pull was minimal. It tracked cleanly and silently around its relatively small window. The kite turned incredibly quickly and very tight angled turns were especially easy but care and fingertip control was required.
The Utopia is certainly different to a conventional trick kite in the way it reacts, once again it responded best to tiny hand movements Getting it to axel took some time, although flat spins and 540s were very easier to achieve straight away. Stalls and side slides were pleasingly well done, and the kite was especially ready to pop into a pancake or lazy susan.
The Utopia has very light spars and two did break during testing, both lower spreaders and both in the same place; to balance this the kite was flown outside its normal wind range, and the other spar broke on the ground attempting a dead launch.
CONCLUSION
The Utopia is a very beautiful object, worthy of display on a wall at home. It is also a very complex machine capable of many varied flying styles The complexity of the tuning possibilities combined with the light, relatively fragile frame make this a kite more for the expert than the beginner, but those prepared to spend time on the kite will undoubtedly be rewarded with many hours of flying as well as aesthetic pleasure.

European kite Designer Martin Schob has outdone himself with his new design, the Utopia. Its blend of form and function would be equally at home at New York's Museum of Modern Art or at your favorite kite field. One look at this new kite and we knew we had to have one in our bag. The hard part was deciding which color. Designed for medium to light winds, the Utopia presents many adjustment possibilities. In addition to traditional bridle and stand off adjustments, the Utopia has sail tension adjustments going nose to tail as well and front to back. Martin's design credentials are unquestionable and suggest that this will be one of the hottest new kites of 1999. Two things we know for sure are that the Utopia is guaranteed to turn heads on the flying field and it looks great hanging on your wall! And now back to the color question...... Which one?.. Comes in a deluxe padded bag for those rare moments when its not in the air or on your wall.