Looking forward to fly my kites next week at the windscape festival in Canada next week!
See more... at the following website 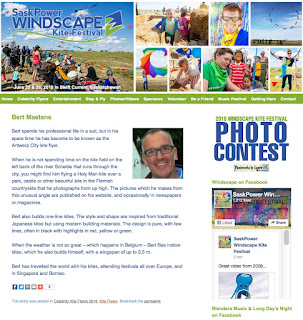 Bert spends his professional life in a suit, but in his spare time he has become to be known as the Antwerp City kite flyer.
When he is not spending time on the kite field on the left bank of the river Schelde that runs through the city, you might find him flying a Holy Man kite over a park, castle or other beautiful site in the Flemish countryside that he photographs from up high. The pictures which he makes from this unusual angle are published on his website, and occasionally in newspapers or magazines.
Bert also builds one-line kites. The style and shape are often inspired from traditional Japanese kites but using modern building materials. He got also a large collection of display kites.  The design is pure, with few lines, often in black with highlights in red, yellow or green.
When the weather is not so great – which happens in Belgium – Bert flies indoor kites, which he also builds himself, with a wingspan of up to 2,5 m.
Bert has travelled the world with his kites, attending festivals all over Europe, and in Singapore and Borneo.